The History of BOSS

BOSS got its start in the late 1960s with a man named Larry Dean Olsen, noted author of Outdoor Survival Skills. In the 50 years since, the outdoor survival school has gone through a few changes of ownership and lots of growth. The program remains true to its original vision: create a place that teaches primitive skills and helps people grow through their experiences in the natural world. Our 28-day field course has changed very little from when it was first designed in 1968.

In 1968, a Brigham Young University professor was concerned to see cohorts of unmotivated students sitting in his classes, many on the verge of failing out of school. They were clearly bright, but something was missing. That professor, Larry Dean Olsen, had an idea. A lifelong student of survival skills and wilderness travel, Larry suggested the following to the school: let him take the failing students into the wilderness for 30 days. Give him a chance to travel with them through the heart of one of the wildest places in the country, to test them physically and mentally and to give them the opportunity to reconnect, renew and recommit to their life’s path. He suggested that a deeply challenging wilderness program could teach students resilience, mental toughness, and adaptability. In the pre-litigious world of the late 1960s, BYU agreed. So that summer, under the supervision of the Department of Youth Leadership, a group of students boarded a bus with Larry and drove South for a month in the wilderness. The group started near Green River, Utah and hiked south through Robbers Roost, a remote and rarely traveled labyrinth of deep sandstone canyons. They then turned west and made their way through the massive walls and washes of Capitol Reef and then up over the 11,000′ plateau of Boulder Mountain. For 30 days they hiked, and hiked, and hiked – covering close to 300 miles with little more than a wool blanket and some simple food. The focus wasn’t on the gear or on the food, it was on the people and the wilderness. The students learned to meet immense challenges boldly and with grace. And they returned to civilization transformed. As a result of the trip’s success, the BYU Survival Course (also called Youth Leadership 480) was born. 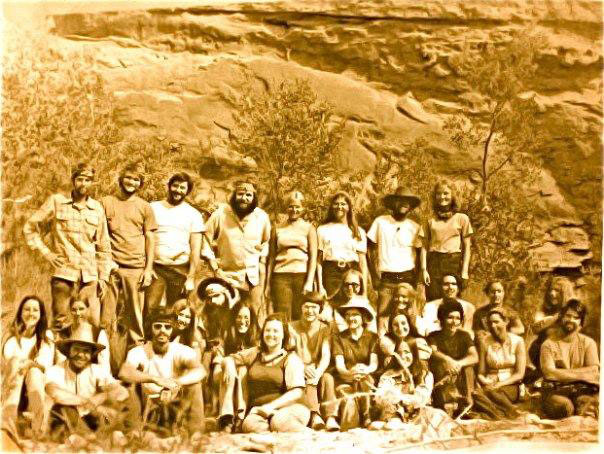 The first BOSS course, thanks to Karl Stice for sharing this photo 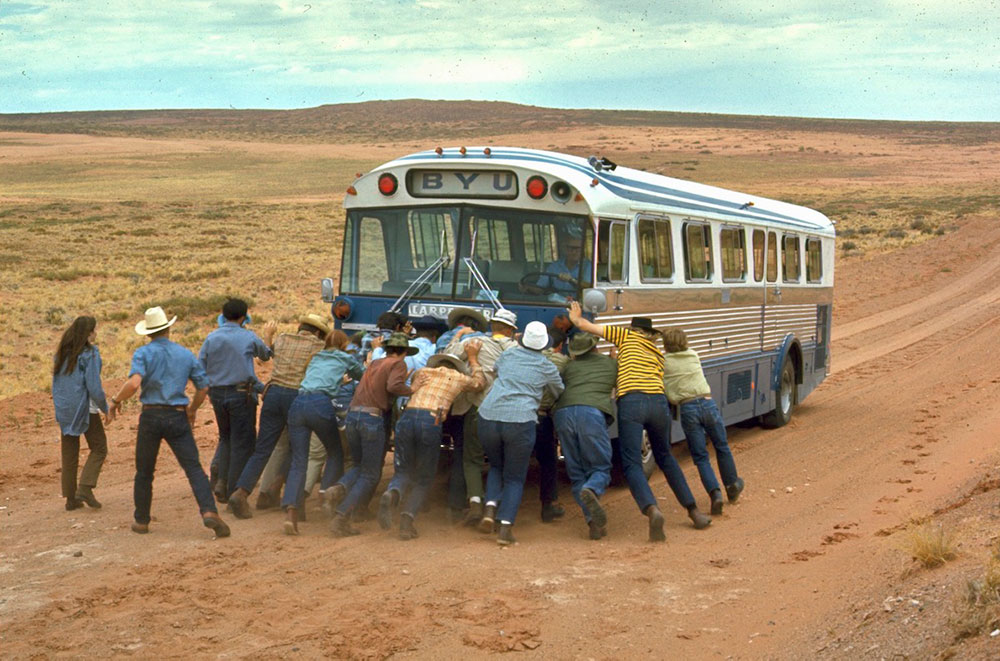 The BYU bus breaks down in a very remote stretch of Southern Utah.

For the next 10 or so years, under the leadership of a determined group of instructors (Larry Mullins, Doug Nelson, Dave Wescott, and others), Youth Leadership 480 continued to take BYU students into the wilderness of Southern Utah to give them the chance to learn primitive skills and meet the challenges of the wilderness. When Larry Mullins was injured in 1973, Doug Nelson took over management of the program. Under Doug’s leadership the program flourished and grew. Doug streamlined and built the program in the university context, then in 1977 took it out from under the umbrella of BYU and incorporated it as an independent business in the small town of Boulder, Utah. Thus Doug Nelson founded the Boulder Outdoor Survival School. 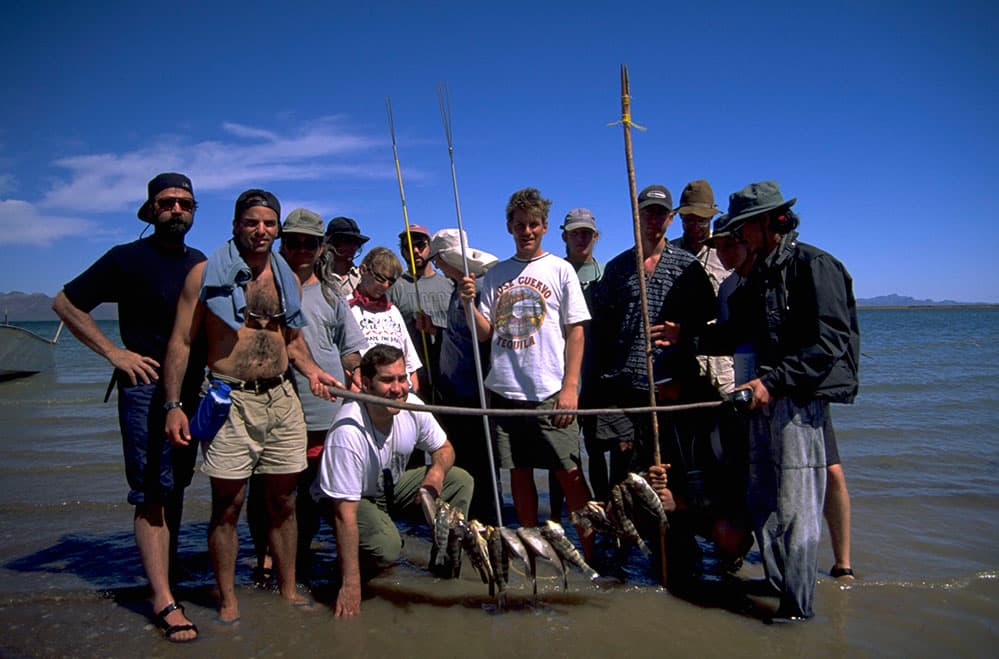 A BOSS course in Mexico. Students studied with the Seri people on their land.

Doug continued to run BOSS until 1985, when his friend (and another of Larry’s instructors) David Wescott took the reins as owner. At this point, BOSS already had a reputation for offering a tough physical and mental challenge to its students. Dave grew the program to include teaching the traditional skills of Ancestral Puebloan and Fremont cultures, adding more depth and a strong skills-focus to the program. He hired instructors who appreciated the history and legacy of indigenous people and who could teach the skills of so-called “primitive” cultures to modern outdoor enthusiasts. In the late 80s, BOSS began expanding beyond Utah, offering courses in Mexico. In 1988, David and other BOSS staff founded the Rabbitstick gathering in Idaho. 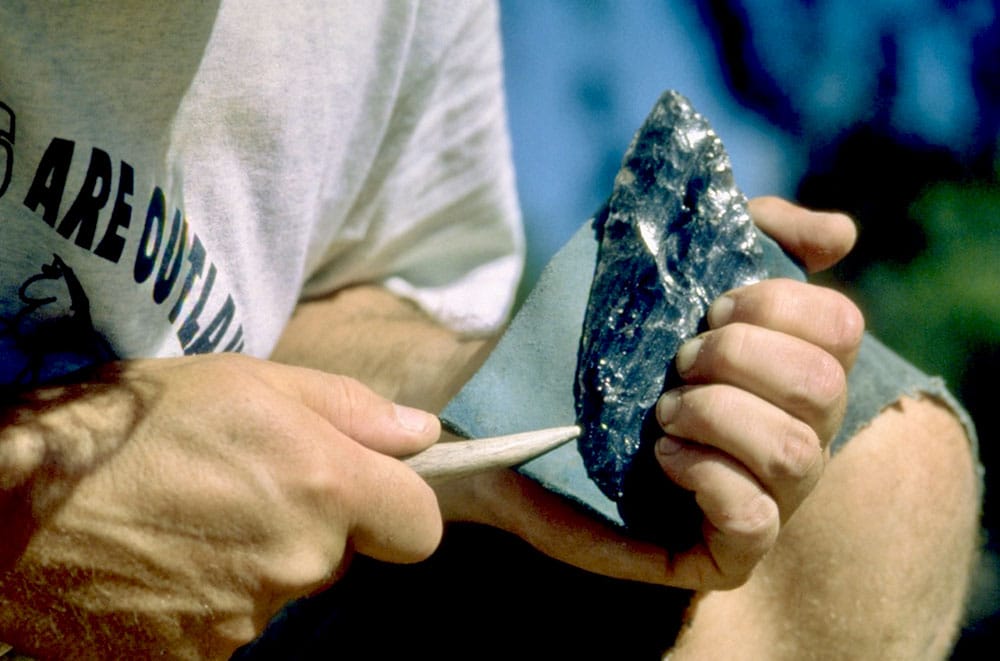 By 1990, in addition to its world-famous Field courses, BOSS was offering Skills courses intensively focusing on the practice of traditional skills. With topics ranging from edible plants to pottery to stone tools, students had the opportunity to explore the world of these skills and the connection to human history they provide in greater depth, without the challenge of extreme hiking. In the 90s, BOSS also started running courses in Canada with Mors Kochanski. In 1994, BOSS alumnus and past staff member Josh Bernstein returned to BOSS as Marketing and Administrative Director, opening a new office in Boulder, Colorado. Josh restructured the BOSS curriculum to include an even greater emphasis on traditional cultures, and eventually took over as owner in 1997. More and different courses soon appeared as the outdoor survival school grew to accommodate growing demand from students. 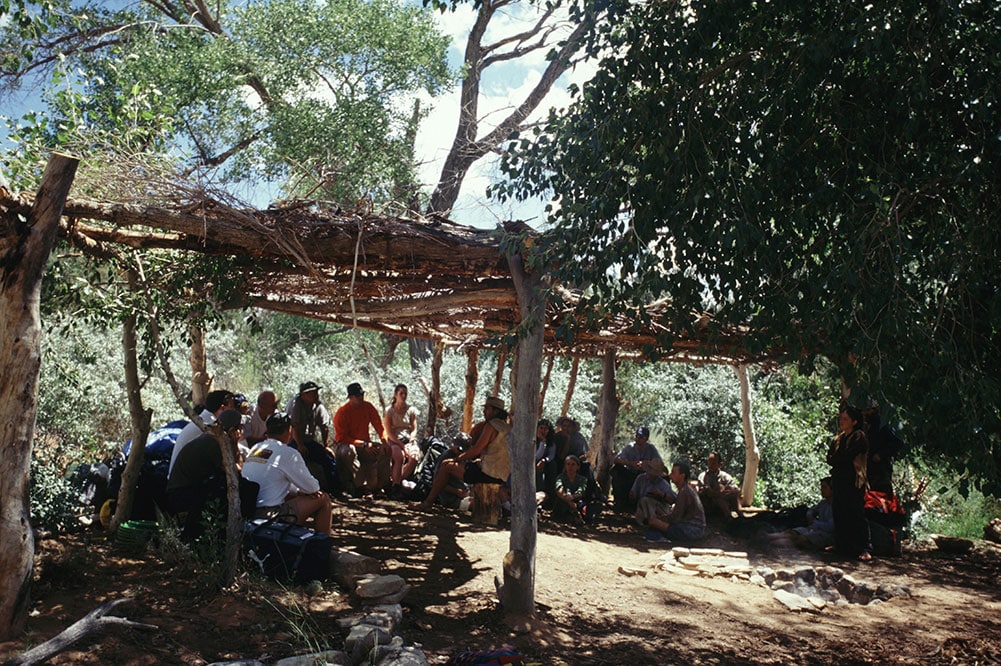 In 2001, BOSS’s Field Office in Boulder, Utah moved from a 1/4 acre parcel of land to 41 acres on Highway 12. Back in Colorado, Jenny Stein joined BOSS as Customer Service manager. In 2004, Jeff Sanders took over as Program Director. Under Jeff’s leadership, many systems were put in place that ensured smooth field operations, staff development, and consistent delivery of the BOSS curriculum. Under Jenny and Jeff’s supervision, the number of students, courses and staff continued to grow. 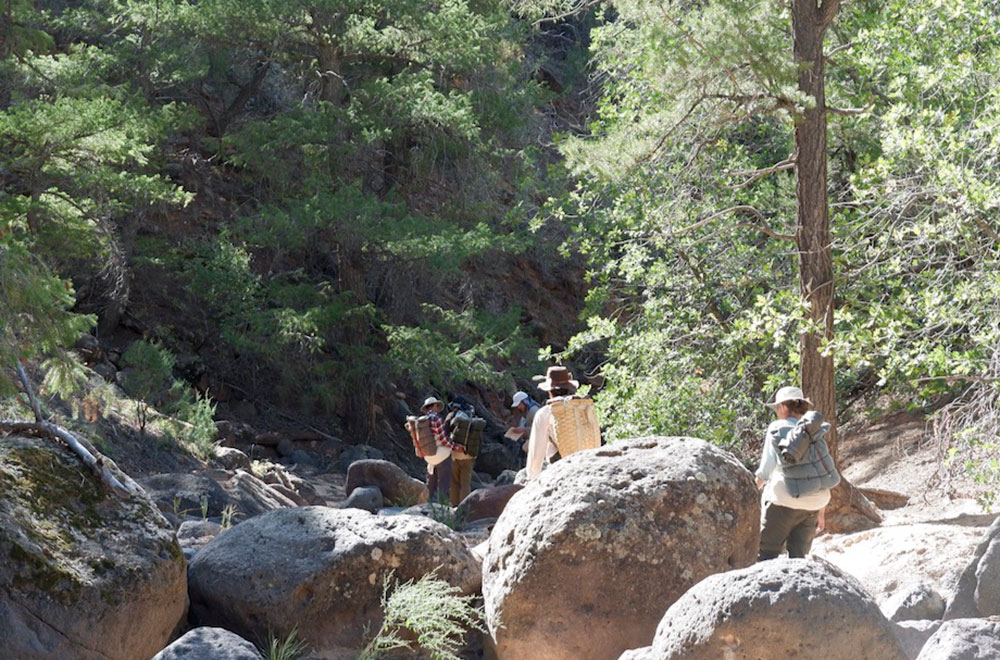 Students travel through a remote canyon.

In late 2010, Steve Dessinger, Laurel Holding and Bryan Puskar – all long-time instructors of the school – were promoted to Director positions, each with a specific area of responsibility, and in 2014, Josh Bernstein passed the torch of ownership to Steve Dessinger. In 2015, with the support of a small army of dedicated BOSS alumni, BOSS Instructor (now Board Member) Jessica Ewing and Laurel Holding established the first-ever BOSS Scholarship fund. Since then BOSS has been awarding grants to students demonstrating financial need and strong merit. After running the school for four years, Steve decided, with the support of other long-time BOSS staff, to transition the school to a 501(c)(3) nonprofit organization. This shift signaled the strong directive of Steve and the staff for the school to stay true to its roots as an educational institution. The nonprofit hit the ground running, with a hard-working founding board of directors made up of the BOSS staff Perry Tancredi, Jessica Ewing, Michael Denisoff, Charlie Detar, and of course Steve Dessinger. The board named Eli Loomis as BOSS’s first executive director. 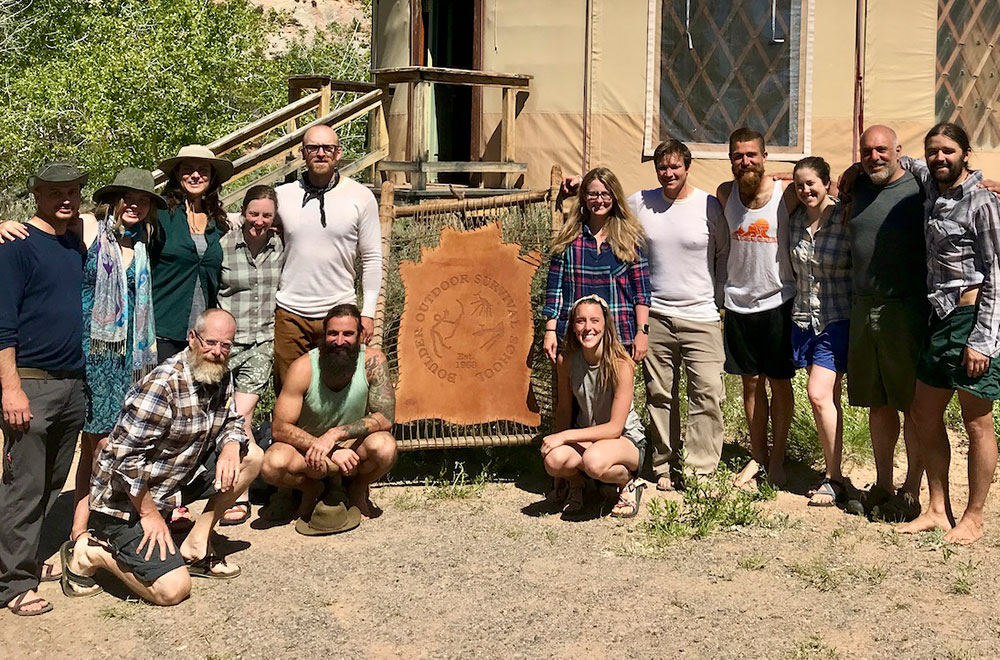 The heart of the BOSS experience – the field course – has changed very little since its inception in 1968. That program, which has proven to be so powerful for our students over all these years, was out in the field for its 50th consecutive year in 2018. Thanks to the hard work of all the staff members of the school, BOSS remains dedicated to its cause: to teach traditional living skills and offer courses that challenge people to learn about themselves and grow through experiences in the natural world. Although the structure of our courses hasn’t changed much in 50 years, our knowledge and experience have deepened. We are extremely proud of our staff, who are experts in the field and also just amazing people. Each course through the high mountains and deep canyons of the Boulder area still brings to life traditional skills, offers tough mental and physical challenges, and provides a profound wilderness experience unlike anything else.

Select Your Boss Course
Donate to support the BOSS MISSION

Our survival instructors are some of the most experienced and competent in the world. The challenges that our BOSS outdoor survival school offer aren’t for everyone, but if you’re the right person and it’s the right time for you, we promise our survival courses will provide adventure, challenge and world-class instruction.