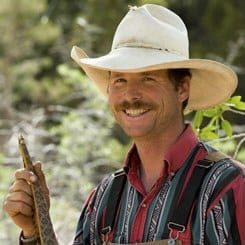 I came to BOSS because:

Many of my friends over the years have been affiliated with BOSS, and Boulder is my hometown, so it was natural to eventually become involved.

I teach at BOSS because:

I am passionate about many of the skills, practices, and ways that are “BOSS.” I love to teach and I love to learn, and both of these are a way of life at BOSS.

Aram grew up on an organic, self sustaining farm in Boulder, which means he can do pretty much anything. He grew up plowing the fields with a team of draft horses, making saddles and shoes, blacksmithing, building with logs and timbers, handcrafting bows and arrows, raising livestock and chopping wood. Aram’s favorite things to do include playing with his children, hunting big game with traditional and primitive archery equipment, and working cattle in the wild country left around Boulder. He also enjoys working with his hands, making and selling the occasional bow or saddle. Aram has an identical twin brother named Joseph. In addition to his role as a backcountry hunting guide, Aram has also published outdoor/wildlife photography in five different magazines.